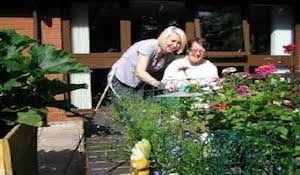 Lincolnshire House is a Residential and Day Care Centre for individuals with Cerebral Palsy and similar disabilities. All of our residents have Cerebral Palsy in one form or another, while our day attenders’ conditions range from Cerebral Palsy to Stroke Damage, Road Accident Injury, and other conditions which affect both physical and mental ability. We therefore have to provide activities and equipment to suit a wide range of capability levels, and the ‘My Improvement System fits the bill admirably.

We have a number of computers which can be used for writing or getting onto the internet, but for individuals with no (or limited) literacy skills, this option offers very restricted usage, without one on one support from a member of staff. The My Improvement Technology on the other hand, can be operated by anyone with basic hand /eye co-ordination.
Individuals can learn to easily navigate their way around the various activities available, from the games, music and painting content, as well as accessing the ‘Reminiscence’ program.

The ability to be able to create a ‘Favorites File’ for an individual also means they are able to access particular sections that appeal to them, store them as favorites’ and they then have their own portfolio of content. They discard what they don’t want to see, but this does not remove the content from the unit and makes it available for others as part of their search.

My Improvement Network has proved extremely beneficial, not only to the individuals that have been mentioned, but also to all the other Service Users who are keen to explore the system

‘A’ is a gentleman resident who reached seventy one years of age in August 2013. During the summer of 2013, A underwent a period of extreme mental confusion which led to him not being able to recognise people or his surroundings. At one stage he would sit in his wheelchair all day constantly repeating the same word over and over again, in varying degrees of volume. I decided to try him on the ‘My Improvement System, and when it was free one day, I brought
him over to the Centre and took him through the various activities it offered. I found the ‘Reminiscence’ application was particularly useful in concentrating his mind and bringing him back to reality, as was the music application.

A is particularly fond of Big Band Music and playing different tunes, I was able to ask him if he recognised the music? He gave me the title. It was a great trigger to stimulate conversation and he went on to talk about the various bands and his favorite tunes. It concentrated his mind again, even if only for short periods and had him smiling, laughing and indulging in lucid conversations.

The Reminiscence application afforded a similar opportunity to bring him back to reality for short periods. We used the media content already loaded to engage his memory and interests. Bringing up photos, video clips and music clips was again an easy way to get A into conversation. I was able to ask leading questions which drew him into conversation. Did he remember the old TV shows, could he date the pictures from their content using fashions or vehicle types etc., or could he recognise famous places?

I am pleased to say that A has now made a good recovery, but we are extremely grateful for the ‘My Life’ system which helped us to find a doorway to the private world into which he had retreated, and supplied A an oasis of lucidity in a desert of confusion.

B started coming to us about six years ago from another Day Care Centre which was being closed down. He is a road accident victim from 1988 when he was knocked off his bicycle and suffered brain trauma which left him a coma for several months. He is wheelchair bound with severe memory problems. He requires the permanent use of a wheel chair and has severe memory problems.

He has always enjoyed going on our computers, but only in terms of playing ‘Solitaire’. At home he uses his own computer, purely for playing games. We introduced him to the ‘My Improvement System, and again he found some of the games very appealing, as a Football supporter, the Free Kick game was particularly popular. He also found ‘The Shooting Gallery’ enjoyable.

I then showed B the ‘My Story’ application, and having obtained some old photos from his family, he is now in the process of creating his own book. We scanned the photos for him, put them on the system, and he is actually typing in the
descriptions on the pages himself. The pictures act as a good prompt for his memory, and although he may initially say he can’t remember something, information we have received from his parents can be used to trigger his memory, and he is able to discuss individuals, situations and activities relating to the photos. It has not only helped him to remember things, but has given us the opportunity to find out more about his past.

K is a resident of long standing. He comes over to activities every day, but only occasionally takes part in the activities themselves. However he has been introduced to the ‘My Improvement System, and now regularly wants to get on there and play the different games. He has particular favorites, which he will sit and play either on his own, or with other residents.

K is capable of touching the screen himself, and will also sit and touch the chosen numbers for other less able users. Not only does the system give him pleasure, but has also developed his socialising skill, so a great tool in removing social isolation.

To sum up, the ‘My Improvement System has proved extremely beneficial not only to the individuals mentioned through the Case Studies detailed here, but also to all the other Service Users who are keen to get onto the system. This has led to us ordering another unit to enable these other individuals to equally enjoy the same benefits much more frequently.

Lincolnshire House is a Residential and Day Care Centre for individuals with Cerebral Palsy and similar disabilities. All of our residents have Cerebral Palsy in one form or another, while our day attenders’ conditions range from Cerebral Palsy to Stroke Damage.
Some additional information in one line